File system as a requirement

The file system–a tree-like representation of file data and metadata–is a necessary component of any export from RPM data, even if the export is not to a file system. There are two reasons for this: directory permissions, and symlinks.

Writing to the unwritable: read-only directories and their children

If we were to write these entries to the file system in order, we might do something like:

The problems with this approach are 1) creating /dir with the final mode means that the files underneath /dir cannot be written, and 2) writing the files beneath /dir will change the modification time of /dir.

RPM itself handles the first issue by requiring everything to run as root, and the second by mostly ignoring it and letting package installs update mtimes.

For other archive formats, this issue is handled by creating directories as writable regardless of the archive mode, and then calling chmod() and utimes() (or equivalent) after the directory contents have been written. This often creates an expectation for the order of members within an archive. In the case of GNU tar, it will defer the directory time and permissions until it sees an archive member that is not under /dir. This means that if we create an archive that looks like:

tar will call chmod() and utimes() on /dir when it sees the /not-dir archive member, and then /dir/file-three will cause an error since /dir is no longer writable.

When exporting RPM data to other formats, that means we must build a tree of all paths across all packages to be exported before creating a new archive. For example, let’s create an archive containing the filesystem package (which includes the metadata for /usr/bin) and the sed package (which includes /usr/bin/sed). We can use the bsdtar utility from libarchive to naively concatenate the rpms into a single archive:

And if we try to extract it with GNU tar, we get a bunch of error messages.

In order to build a portable archive from these two packages, we need to create a file system tree containing all of the paths to be exported, and use this tree to determine the order in which to export the paths. In the case of tar, the paths need to be exported in a depth-first, pre-order traversal.

Symbolic links really tear things up, and there’s not an easy way to work around them. The problem, briefly, is that because RPMs can contains symlinks, and because RPMs are more or less self-contained, unaware of the context into which they will be installed beyond what is expressed in the dependency graph, any package can modify the paths of any other package.

UsrMove was a feature introduced in Fedora 17 to reduce redundancy in the file system. Historically, utilities and libraries necessary to initialize the system, which may have included mounting /usr, were present in the top-level /bin, /sbin, and /lib directories. The use of initramfs files for the boot process made these top-level directories unnecessary, so the contents were moved to the corresponding directories under /usr. In place of the top-level directories, symlinks to /usr were installed so that existing references to /bin, /lib, etc. would continue to work. For example, nearly every shell script in the world expects to find /bin/sh, so /bin/sh needs to continue to work even after the shell has been moved to /usr/bin/sh.

The Fedora UsrMove feature did not include guidance for packagers, so packages that contained pre-UsrMove paths in /bin, /lib, and /sbin reacted in several ways.

Crud up the Provides

Packages that require, for example, /bin/cat, will continue to work across the UsrMove.

It’s not my problem, it’s your problem

Another way to deal with the move is to not deal with it at all and break backwards compatibility. This is what ntfsprogs did. In Fedora 16, ntfsprogs installed its utilities to /bin and /sbin. In Fedora 17, ntfsprogs moved its utilities to /usr/bin and /usr/sbin, and added nothing to the its Provides. Any package that depended on the pre-UsrMove /bin or /sbin paths would need to update in order to continue to work.

It’s not my problem, it’s the file system’s problem

This is the fun one. A package could also choose to do literally nothing at all. Do not update provides. Do not update paths. Continue to install to /bin, /lib, etc. As long as the UsrMove-installed symlinks are in place, package installs and upgrades will correctly use the new /usr paths. RPM metadata can all continue in its pre-UsrMove state.

One thing demonstrated by the grep case is that packages have implicit dependencies on the packages that provides their parent directories. In order to correctly install /bin/grep, /bin needs to be installed. When installing packages, RPM will automatically create missing parent directories, but this is dangerous. The parent directory might not be a directory.

If we were to install the filesystem package, which provides the top-level symlinks, after installing grep, we will get an error. filesystem will be unable to create the /bin symlink since there is already a /bin directory in the way.

This particular case is actually handled by RPM dependencies, and it’s super fragile.

In Fedora 27, the minimum set of RPMs needed to install grep is 20 packages. The dependency graph looks something like this: 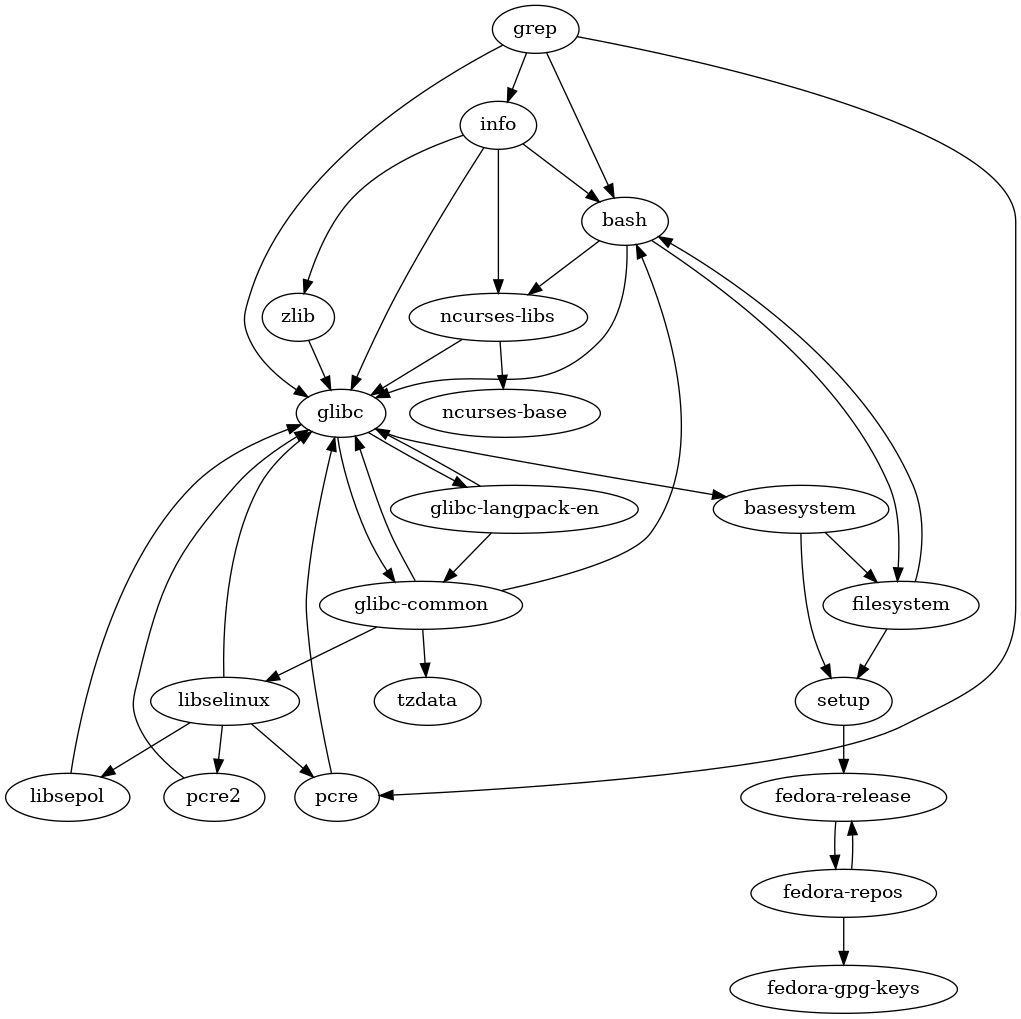 Simple. There are two paths that pull in the filesystem package, which is what we need for those important top-level symlinks. The grep -> bash -> filesystem path is mostly an accident. grep requires bash to run its package scripts, and, even though RPM stores script dependencies separately, it always evaluates them whether they are needed or not. glibc -> basesystem -> filesystem is the important path. It’s assumed that glibc will be at or near the bottom of any dependency graph, so in order to provide a base environment glibc depends on basesystem, and basesystem depends on the directories and symlinks that make up the core of the system.

When installing packages, RPM will break cycles in the dependency graph to form a DAG and tsort the result, in an attempt to install packages in dependency order. When installing these 20 packages as a set, filesystem will be installed early, and grep will be installed last. So, for the case of packages that depend on symlinks in the filesystem package, you’re covered by a lot of dependency arcana and little bit of persistent luck. For anything else, you’ll have to come up with your own solution.

Symlinks and other export types

There is enough information in RPM metadata to order a transaction such that the file system can resolve paths to the correct location. When exporting RPM data to something other than a file system, however, this is not enough.

When exporting to a tar file, for example, the consumer of the tar file may not be able to handle the /bin paths when /bin is not a directory, regardless of the order the archive members.

This means that exports of RPM data to archives need to implement a file system, even if the final target is not a file system. The export process needs to be able to resolve symlink paths to real path, across multiple packages, in order to create an archive that is internally consistent.

A file system is always required in order to describe RPM data, even if the files are not being written to a file system. In order to aggregate the data from multiple packages into an internally consistent archive, we need to be able, at the least, to order files and directories in a depth-first fashion, and to resolve symlinks to directories to the actual, final directories.